The Fate of the Oklahoma 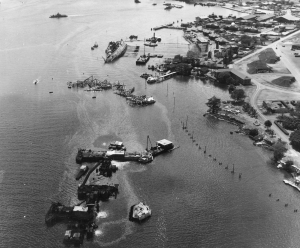 Righting the Oklahoma took almost 3 months. At bottom of the photo is the wreck of the Arizona, still leaking fuel. May 1943

During the Pearl Harbor attack on December 7, 1941, Japanese B5N “Kate” bombers scored five torpedo hits on the USS Oklahoma’s port side. The massive damage to this aged battleship prompted her to begin listing to port. Within minutes, she had turned turtle, trapping hundreds of sailors in her hull. In the hours and days after the attack, civilian shipyard workers and other sailors worked furiously to cut openings in the Oklahoma’s exposed keel in order to rescue the men still alive inside the ship. The effort saved thirty-two men. Stephen Young, one of those rescued, later wrote a gripping account of what he and his fellow sailors endured during those horrific hours after the ship turned turtle. Find his book here: 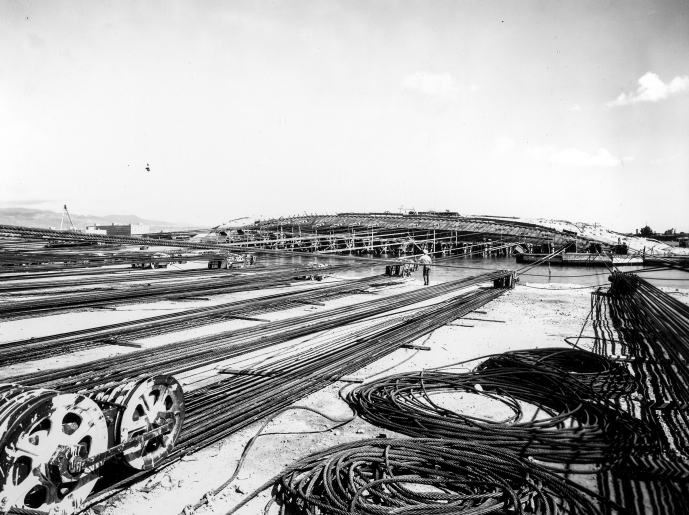 The cable system employed to right the Oklahoma had to be reset every few days as the ship began to roll. It was slow work and took months to complete.

Four hundred and twenty-nine men died aboard the Oklahoma. Only the Arizona‘s destruction cost more American lives on December 7th. Most of those sailors died within her hull, and as salvage work began on her in mid-1942, one of the first tasks was to recover those remains. For the sailors, divers and civilian contractors assigned to the vessel, the work was gruesome, dangerous and emotionally taxing to the utmost. 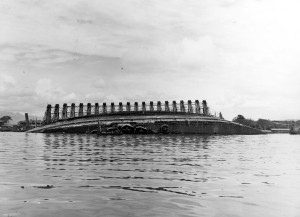 From the spring of 1942 to the summer of 1943, the salvage operation continued. Patches needed to be welded to the hull to cover the torpedo damage and make the ship watertight again. Teams of divers and workers cleared out ammunition, cut away damage and pumped out the thousands of gallons of fuel still remaining in the battleship’s tanks. As that work continued, other teams emplaced twenty-one massive winches on Ford Island. The salvage team rigged cables between the ship and the winches, and these were used to gradually pull the Oklahoma upright. It was a slow task that required intricate engineering work. After three agonizing months, the winches finally righted the wrecked battleship. 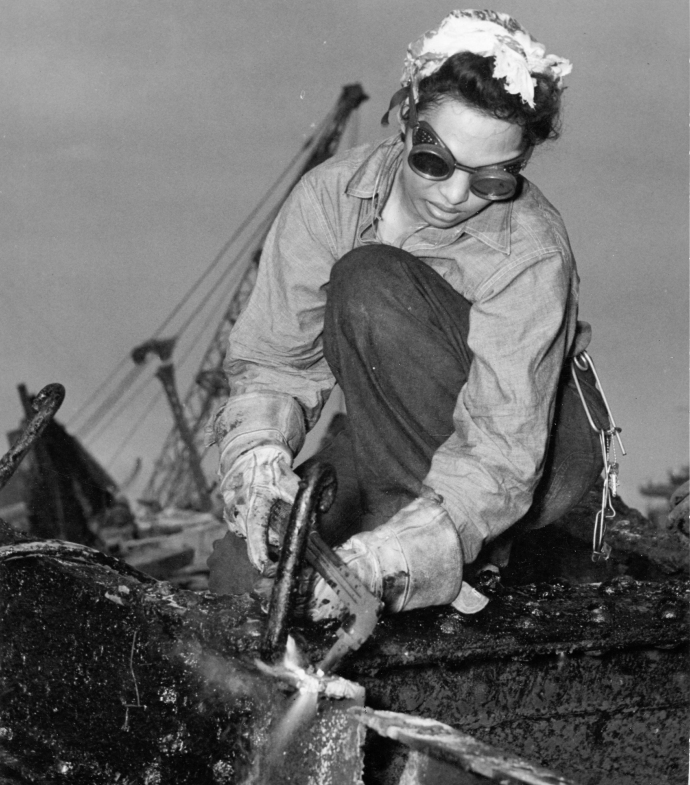 A civilian salvage worker aboard the Oklahoma in 1943. This was grueling, dangerous work which included having to recover the remains of hundreds of fallen sailors who’d been trapped aboard the battleship when she turned turtle. 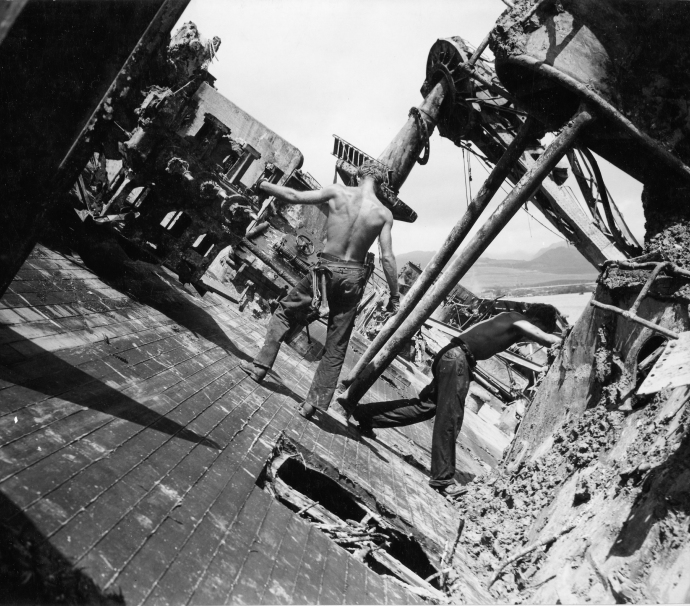 Once back on an even keel, the work to make her watertight was finished. Machinery, the rest of her ammunition and weaponry were pulled off and she was basically stripped to await scrapping. She was eventually towed to drydock where the work was finished. She spent the rest of the war moored in the harbor as a silent reminder of that terrible day in December 1941. 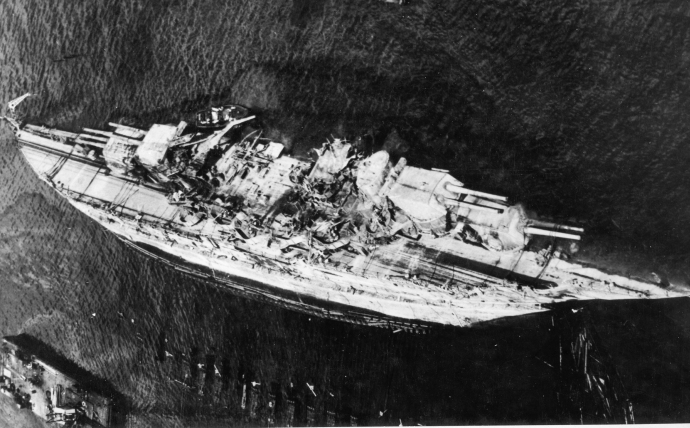 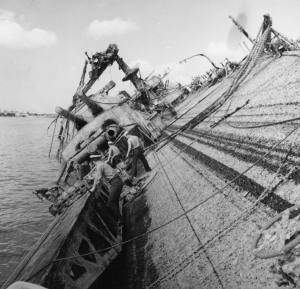 She was sold for scrap after the war, but while under tow to San Francisco in May 1947, she and her two tugs encountered a heavy storm. The battered old battlewagon couldn’t take the rough seas. She began to take on water, and a dangerous list developed. As she began to sink, the Oklahoma nearly dragged both tugs down with her. Fortunately, quick action on the part of the tugs’ crews prevented such a disaster. Oklahoma went to the bottom some five hundred miles east of Pearl Harbor. Her hull may lay in an anonymous Pacific grave, but her heart was torn out on Battleship Row in 1941. 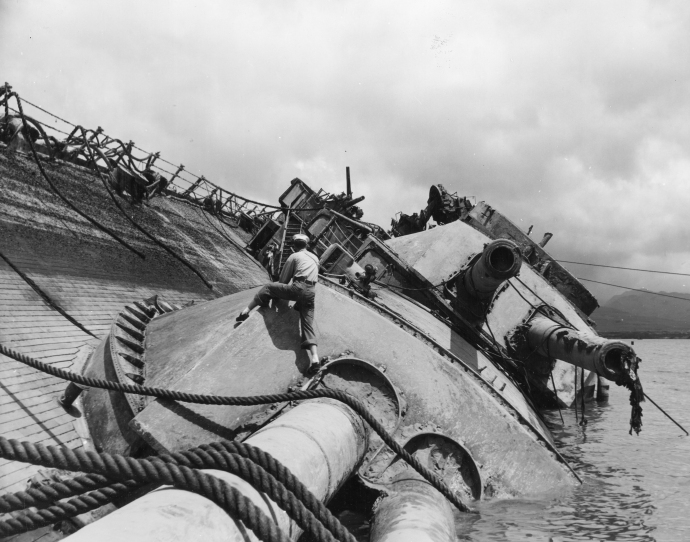 One thought on “The Fate of the Oklahoma”