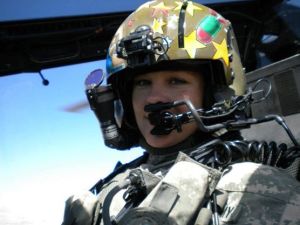 Cass in her Apache’s cockpit. See Part I of Gwenie’s story for how we met in Afghanistan, and how Cass and her fellow pilot, CW5 Reagan, saved a lot of lives (including my own) over Ajerestan in September 2010.

A few weeks back, I wrote a story about my dear friend Cassie Wyllie, ace Apache pilot and animal lover. Cass and I met in Afghanistan during the Surge in 2010 and have remained close friends ever since. In 2013, we saw each other for the first time since our time at FOB Shank, meeting up for the absolutely awesome Reno Air Races. (side note: if you love aviation and have never been to Reno, go. There is nothing like the sight of Sea Furies, Bearcats and Mustangs tearing around pylons a few dozen yards off the desert floor at four hundred miles an hour.)

Anyway, Cass was deployed to Jordan last fall in what would be her final overseas trip for the Army prior to her retirement. While on post there in the Middle East, she discovered four orphaned puppies huddled in a make-shift den. They were starving, and there was no sign of their mom. Animals on American bases are strictly prohibited, so these four little guys were almost certainly doomed. Cass rescued the four and got them off post to a foster home in Amman. Two of the pups died while in foster care, but Gwenie and Penny survived. Determined to get the pups back to the States, she started a gofundme.com campaign that raised several thousand dollars to cover their expenses. Partnering with the epic and well-organized Puppy Rescue Mission, a non-profit totally devoted to bringing home the animals our service men and women bond with while in combat theaters, the two pups were saved and sent to the United States.

Gwenie and Penny in Chicago. Some truly dedicated and awesome volunteers there took great care of these two during their layover, for which we’re extremely grateful.

Three years and half a world removed from that day we met in Afghanistan, Cass and I reunited at the Reno Air Races. Our mini-reunion will always be one of the unforgettable moments of my life.

Just before Thanksgiving, Gwenie and Penny were flown from Jordan to Chicago, where the PRM folks fawned all over them, giving them tons of love and comfort in what had to have been a very taxing journey for them. From there, Penny went to Texas to await Cassie’s arrival home. Gwenie flew to Portland.

On the day she got into PDX, my family climbed into our ancient but much-loved Ford Explorer and drove up to the airport’s cargo center. Waiting for us was a twelve pound, tan pup with big doe eyes who starred out from her crate’s barred door with a look of interminable sadness. My daughter, Renee, bent down and began stroking her nose. My son Ed, quickly joined her. The two soothed and calmed our new pup as I filled the paperwork out officially transferring her to my care.

Gwenie sat huddled in Ed’s lap during the drive home. He stroked her head gently and sang to her. His voice did the trick. Soon she was sound asleep in his arms as we rolled down I-5 for our little Oregon town.

In the days that followed, Gwenie’s transition was probably a bit harsher than we had intended. I do a lot of writing up in the Cascade Mountains, and my plan was to take her up to the cabin I rent in the Willamette National Forest so the two of us could get to know each other. So, the day after she arrived, I put her on a blanket in the right seat of my Pontiac GTO and headed up into the mountains. Gwen was not sold on automobiles, and she quailed for much of the trip.

Our first view of Gwenie at the Portland Airport.

In Detroit, a tiny resort town that has about 75 permanent residents, I stopped to get food and give her a chance to stretch her legs. There was a bit of snow and ice in the parking lot, and Gwen was fascinated by what must have looked like white sand to her. She pawed a sheet of ice, recoiling as its cold registered on her pad. She sniffed it, then backed away frightened. For a dog that had known little but heat and desert, this was totally new territory for her, and she was not happy. She eagerly climbed back into the GTO, then realized that she hated that too. So, as I climbed back into the driver’s seat, I had a seriously homesick and miserable pup sitting beside me.

That seat she was taking up had once belonged to Volunteers, my bad-ass warrior-rescued feline who was the one good thing to come out of my experience in post-Katrina New Orleans. He loved the GTO, loved exploring Oregon with me, and wherever we went, we made friends. Gwenie was the exact opposite: a dog destined to be at least 60 lbs whose fear dominated her. Volley knew no fear and lived life on fire 24/7.  More than anything, I wanted to pull Gwenie out of that place and draw her out into the world so we could go adventure in it together.

Ed and Renee, eager to go in and see the our new family member.

Well, we drove up to the cabin as I started to worry about the amount of snow on either side of the main highway. The pavement was clear, but I’d not seen any news about snowfall in the area. The GTO is a fair weather car, and I had no chains for it.

We turned off the main highway and started up into the Willamette National Forest. Snow and ice covered the road. I inched the GTO along, feeling it slide around.  The last stretch to the cabin included a steep grade to a gate. I made it up the grade, but when I stopped to punch in the key code to open the gate, the GTO lost traction and wouldn’t go any further. I backed down the hill and tried again, with the same result. A third effort found me sliding toward a drainage ditch, so I put the Pontiac in park, grabbed my gear and Gwenie, and hiked the quarter mile to the cabin.

Renee during a pit stop on the way home from PDX. Gwenie weighed about 12 lbs when she reached us. As of Feb 2, she weighs 33.

Gwen padded along beside me, unsure of the environment and very unhappy with the leash I’d put on her. She stayed close to my legs, and a few times she actually tried to jump into my arms as something scared her.  But we made it to the cabin, and I hustled her inside so we could get warm. I got a fire going, turned on the power and prepared to settle in. Then I remembered I needed to turn the water on. Outside I went, found the valve and opened it. With Gwenie standing in the snow next to me, the valve burst and sprayed water over both of us before I had to shut it off from the road.

So now, dusk was approaching. It was probably 25 degrees or so, and I was wet, Gwenie was wet, and the cabin was non-useable without water. We went back inside, and sure enough, the fire I’d started in the wood stove had gone out. 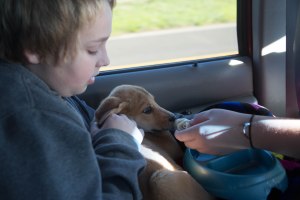 Gwenie snuggles with Ed on the way home from the airport.

Time for plan B. I decided we needed to close up the cabin and get back out onto the main highway before dark. I grabbed all my gear and headed back for the car. As we hiked back down to the GTO, Gwenie was clearly getting into the whole concept of snow. I let her off the leash, and she raced around, making circles around me. Periodically she’d stop to dig furiously, then would bound off at Mach 1, tearing through the snow like a desert-colored blur.

We made it to the car, I loaded it back up and got Gwenie settled.  But, when I tried to back down the hill, the Goat wouldn’t move. I was stuck fast.

Our Katrina rescue, Volley with the GTO at Camp Adair. The two of us went everywhere in the GTO for five years before Vol died of a heart attack while I was in Afghanistan.

For the next two hours, I tried to dig the car clear using boards as traction. I could move it a few feet, but each time, I risked sliding the car into the ditch. Finally, as the sun went down, I called for a tow truck and got the Goat pulled out to safety. Or so I thought.

Turns out, in trying to get the car clear, I had damaged the radiator. I hadn’t gone more than a mile when the engine overheated. I pulled over and called the tow truck again. By now, I was shivering cold and soaking wet. The outside temp had plunged, and with the engine off we had no heat. Gwenie was only about 10 weeks old, and I was worried the cold was going to really affect her. So, I kept her wrapped up in a blanket and a whoobie I’d been using since Katrina for my cabin trips. She settled down, stopped shivering and watched me with those big, doe eyes.

Before the tow truck arrived, I could feel myself getting sluggish and confused. I was having a hard time making decisions, and I realized I’d probably become mildly hypothermic. By the time the truck arrived, I was in a pretty unhappy state. The tow truck driver took one look at Gwenie and I and ordered us into his cab. We climbed aboard, and he blasted the heater full bore at us until I dried off and warmed up. Gwenie sat in my lap and snuggled against me.

The Cedars, the only place open that night when Gwenie and I sought refuge from the cold.

The driver towed the GTO to Detroit, where we left the car and went to the one bar in town. Pup and writer drank soup together as some of the locals shot pool and snatched sidelong glances at us. We were a sorry sight. An hour and a half later, Jenn Bruning came up and rescued us. The GTO was towed another 70 miles home the next morning, where it received a brand new radiator. The first one had lasted 112,000 miles and had been in almost twenty states during my various road trips, so I’m hoping this one will last as long. 🙂

Gwenie on her first walk at Camp Adair, Oregon. I took this a few days after we got back from our aborted cabin trip. Unfortunately, I didn’t get any photos of our adventure in the mountains–I was too cold and miserable to document it!

Through all the craziness, my Jordanian pup and I bonded. That night, as I slipped into bed, Gwenie jumped up beside me and curled up, her warm fur a comfort in the darkness. she slept with her head on my pillow and a paw across my face. The next morning, as I got up to get my day started, she would not leave my side. We’d gone up into the mountains as strangers, but we’d come home as something unique in my life. I was her human now, and she was my dog.

Please check out http://www.puppyrescuemission.com/. The dedicated volunteers there are doing incredible things for our service men and women.