My Last Chino Moment (For this Trip)

At Planes of Fame Last Week:
There I was, walking back to the 475th FG hangar, and here was this little kid staring at the Bell X-2 fuselage tucked beside it. His eyes were wide, mouth agape. He turned to me and erupted, “That’s a Bell X-2! An X-2!! I had no idea there was one here!!”

This was me in 1978. Same place. It brought back memories of sneaking into the boneyard and getting caught inside the fuselage of a Bollingbroke bomber, playing with the controls and calling out Messerschmitts to my gunners.

“Micah. Did you see the three bladed P-51A? It is the only flyable one in the world!”

“Had an Allison engine, not a Merlin. Three blades.”

I started laughing, “Your dad get you into airplanes?”

Again, I had a flashback to my own childhood, eating oatmeal at the kitchen counter as my dad walked in, briefcase in hand, ready for work. “I think Johnny’s ready to build a model,” he said to my mom.

We went to Woolworths. I picked out the Hawk Spirit of St. Louis, and decorated it with Hot Wheels stickers. My dad was disgusted by my murder of historical authenticity. I was three.

Micah looked at me and said, “A little bit. But I read a lot.”
An hour later, I saw him meet Lt. Col. Dick Cole and have his photo taken with him. He was in awe. I talked to his father, who told me that Micah knows far more about aircraft now than he will ever know. “All he does is read and play video games.”

I have wondered if, the farther we get from the living memory of WWII, the number of kids wanting to learn, who are touched by whatever it is we here on this page were touched with, would dwindle away. Meeting this kid showed me that the fire is there in this new generation too. 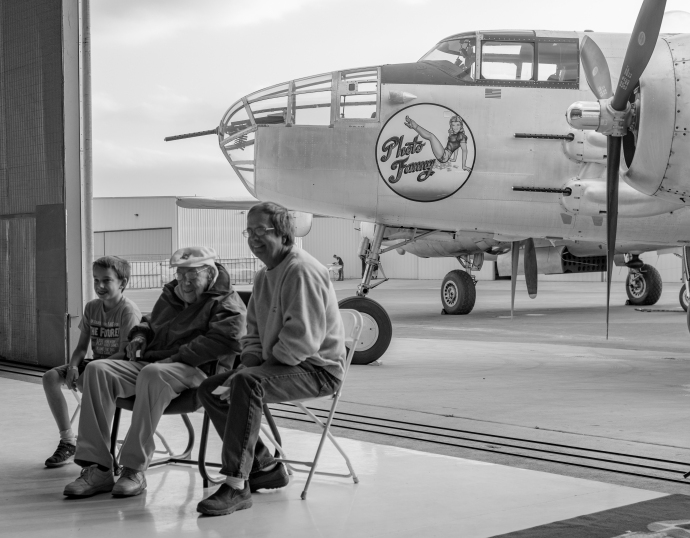 2 thoughts on “My Last Chino Moment (For this Trip)”