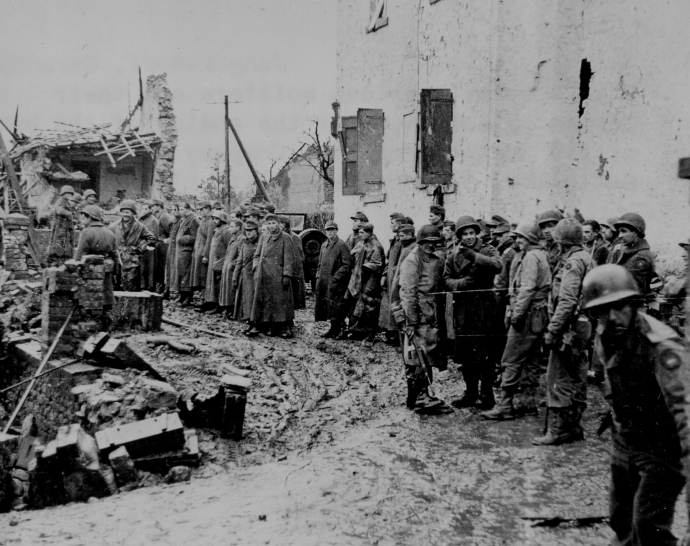 Men of Company I stand guard over exhausted and cold German veterans of the Hurtgen Forest campaign. Captured at Jungersdorf on December 12, they were organized and marched out of the front lines that morning by the equally exhausted survivors of Company I, 39th Infantry Regiment.

The Battle of the Hurtgen Forest remains one of the longest, and bloodiest, battles fought by the United States Army. Through the fall of 1944, two American offensives into the hilly, heavily wooded terrain cost tens of thousands of casualties for little territorial gain. German defenders mined the forest, booby trapped entire sections, and covered all avenues of approach with snipers, automatic weapons and artillery. Attacking into the dense woods led American units to get lost, then pinned down and destroyed by German fire. Many historians have concluded that the fighting in the Hurtgen was among the most needless battles of the war, arguing that the U.S. First Army should have gone around it instead of trying to batter its way headlong through it. Altogether, the U.S. Army lost over 30,000 men; the Germans 28,000. Though most of the fighting ended in December, 1944, some firefights continued to flare up in the area until February 1945.

An American Soldier from Company I, 2-39th Infantry speaks to a hollow-eyed German prisoner of war. Jungersdorf, December 12, 1944.

Though the story of the 8th and 28th Division’s maulings in the Hurtgen have been the subject of numerous books, less well known is the 9th Infantry Division’s contribution to the battle. The Old Reliable Division was actually the first American unit to advance into the Hurtgen Forest in mid-September. They fought through the worst portion of the campaign in October, then participated in the final 1944 offensives in the woods in November and December, losing thousands of men killed, wounded and missing. Non-battle losses were also very high in the division–trench foot, psychological shock and frostbite took a significant toll as the weather dropped and the point-blank carnage day after day wore the men down.

On December 12, 1944, the 39th Infantry Regiment, 9th ID, captured the village of Jungersdorf, a hamlet not far from the Roer River near Dueren. A Signal Corps photographer named Cravens was with I Company, 39th Infantry on that day to capture these scenes of the aftermath of a long and traumatic fight, the cost of which can be seen in the eyes of the men Cravens photographed.

The veterans of Company I slog through the mud and ruins of Jungersdorf at the end of their tenure in the Hurtgen Forest. There would be no respite for these men. Fresh from the horrors of the Hurtgen campaign, they were thrust into the path of the 6th SS Panzer Army and played a key role in the defense of the Bulge’s North Shoulder during the German Ardennes Offensive–which started less than a week after this photo was taken.