The 185th Infantry’s “Boys from Hell” 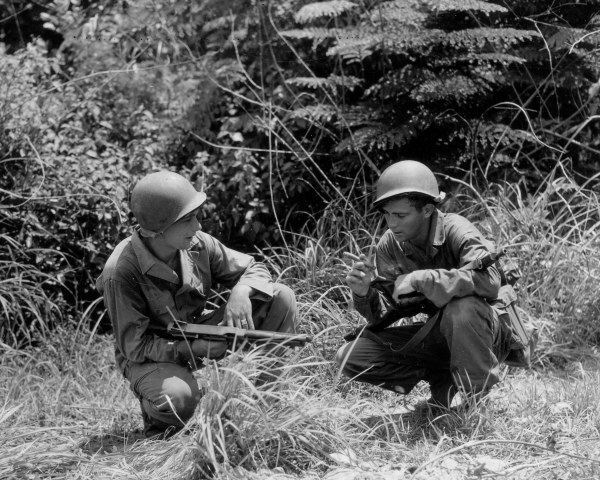 Two of the 40th Infantry Division’s famed, “Boys From Hell.”  Assigned to the Bravo Company, 1st Battalion, 185th Infantry Regiment (California National Guard), PFC Ray Hughes (left holding Tommy Gun) and Sergeant Erwin Hinds (right) took point on almost every operation conducted by their unit during the Philippines Campaign. While fighting on Panay Island, their four-man fire team killed fifty-nine Japanese Soldiers in the summer of 1945. The men of the 185th Regiment nicknamed Sergeant Hinds’ fire team the “Four Boys From Hell” after a particularly brutal series of attacks and counter-attacks on the island. Both men photographed here received Bronze Stars for Valor for their actions on Panay. The other two men in the fire team were wounded in combat and sent home by the time this photo was taken. Hughes grew up in Battle Creek, Michigan and Hinds was a native of Kenosha, Wisconsin.