In May of 1943, the 381st Bomb Group reached England. It had been formed and activated in January that year, undergoing a short, intensive training cycle that included a full formation leaflet dropping exercise over Denver. Led by the legendary bomber pilot Colonel Joseph Nazzaro, the 381st was a tight, disciplined organization. Nazzaro would go into combat for the first time with his beloved 381st, and his tenure with the group led to an extraordinary career that culminated with him commanding SAC in the late 1960’s.

The 381st climbing out over the channel.

The group set up shot at Station 167, RAF Ridgewell in Essex. After a few weeks of settling in and local training flights, the group flew its first mission on June 22, 1943. Two of its B-17’s were shot down by flak and fighters on that first combat run, and two others came home battered and damaged with wounded aboard. It was a tough indoctrination to the air war over German-held Europe.

The following day, the ground crews were busily preparing the Forts for their second mission when a bomb exploded on the flight line. The blast killed twenty four men, yet the 381st joined the rest of the 8th Air Force and continued on to fly that day.

During the August 17, 1943 Schweinfurt raid, half of the group’s bombers went down under the onslaught of determined Luftwaffe fighters and massive flak barrages. Ten crews went with those birds, but one crew returned home after being fished out of the English Channel. Colonel Nazzaro personally led the mission that day, flying the lead Fort in the formation. 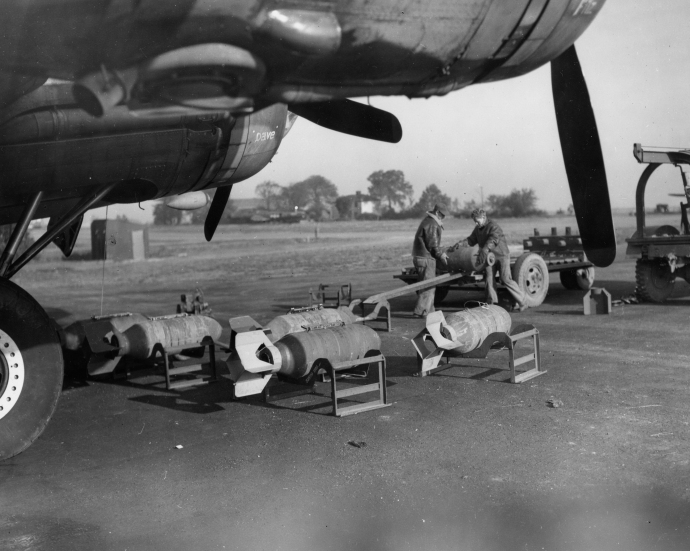 The 381st went on to fly a total of 296 missions–over 9,000 sorties against German targets. It came at a terrible cost–over a thousand combat crews went missing, were killed or wounded during those vicious two years of flying. One hundred and thirty one B-17’s belonging to the 381st never made it back to station 167, which represented roughly 500% of the group’s established strength. 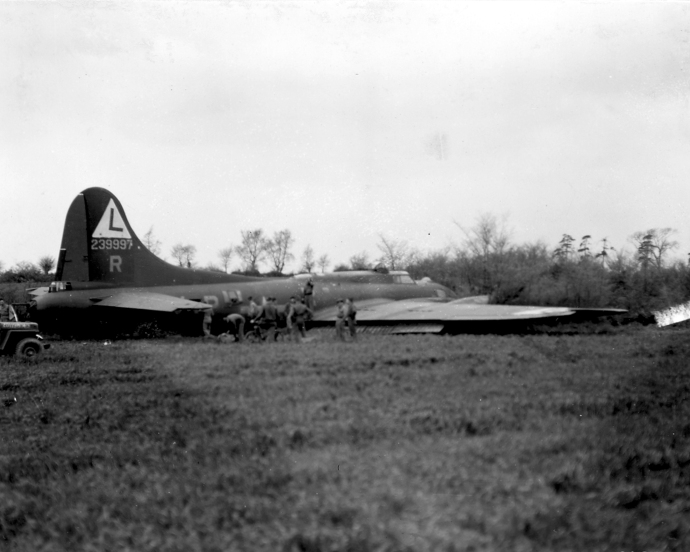 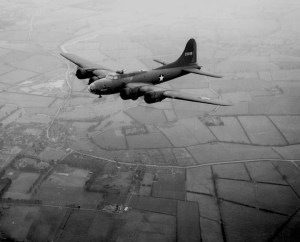 Rum Runner was one of the original B-17F’s that equipped the 305th Bomb Group when it reached England in late 1942. This photo was taken shortly before the Fort was lost with Boomerang on the February 16, 1943 raid over France.

In the Fall of 1942, the 305th Bomb Group arrived in England after a six month work up cycle in Utah, California and Washington. When the men reached East Anglia that fall, the Army Air Force assigned them a batch of factory-fresh Boeing B-17F Flying Fortresses with which they would soon begin operations against German targets in Western Europe. One of those original B-17’s was #41-24611, which the crews named “Boomerang.”  The 305th was one of the first bomb groups to reach the 8th Air Force, which attracted a lot of media and PAO attention. This film clip was taken at the start of one of the unit’s earliest combat missions, either in late 1942 or early 1943. Seen taxiing toward its take off run is Boomerang and her crew.

On February 16, 1943, the 305th flew a bombing mission over Brittany, France. The Forts were hit by flak and fighters, and the Luftwaffe interceptors singled out Boomerang. Firing passes knocked out two of the B-17’s engines, and it dropped out of formation on fire. Other members of group saw a number of parachutes blossom from the aircraft just before it disappeared into a layer of clouds. Another Fort was cut out of its squadron box and sent down in flames at about the same time. Both B-17’s crashed near Molac, France, with one crew member from each aircraft dying in the ordeal.

Battle damage suffered by a 305th Bomb Group B-17 during one of the February raids over Western Europe in 1943.

Boomerang’s surviving crew tried to escape and evade. Several of them were able to avoid capture–at least at first. They were split into two groups, and one eventually was run down by the Germans and taken prisoner. Two men successfully evaded and returned to Allied territory.

Norris Miller was also aboard the aircraft.

Here is the film clip:

Ford and Markland were the two who successfully evaded capture.

The townsfolk in Molac later erected a monument honoring the two crews shot down that day. It can be seen here:

A 381st Bomb Group Boeing B-17G Flying Fortress crew returns to England following a bombing raid to Frankfurt, Germany on February 4, 1944. The group had lost twenty men the week before when the 8th Air Force struck Frankfurt on January 29th. That was the 381st’s 61st combat mission. On the 4th of February, everyone came home, a rare moment to celebrate in the dark days of America’s air war over German-held Europe.