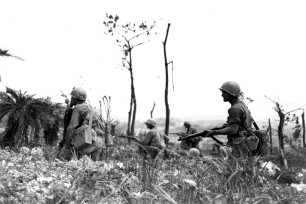 The 96th Infantry Division trained at Camp Adair, Oregon in 1943-44. Known as the “Deadeyes,” the division was one of four that called Adair home, but it was the only one sent to the Pacific. The other three went to Italy and Western Europe.

PFC Castaneda and his regiment served on Leyte Island in the Philippines first, then took part in the Battle of Okinawa in the spring and summer of 1945. In eighty-one days of continuous combat, Castaneda’s division lost over 10,000 men killed, wounded, or missing in action. Thirty-two Deadeyes are still classified as Missing in Action from Okinawa. Only the 6th Marine Division suffered heavier losses.

Louis Castaneda was killed on Okinawa on June 12, 1945, just shy of his 24th birthday, during an assault on Big Apple Ridge, a key position in the last Japanese defense line on the island. He is laid to rest at Golden Gate National Cemetery.